3 Things to STOP Saying to a Veteran Caregiver 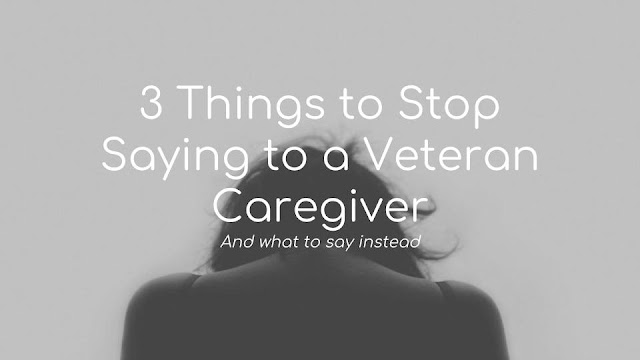 If you're in the veteran community, like I am, you're aware of the many stigmas surrounding the silent wounds of war.  Post Traumatic Stress Disorder (PTSD) is a nasty side effect of war.  It's a very natural reaction to an extraordinarily UNNATURAL event.  Our brains were not created to handle this kind of crazy.  Thank goodness for caregivers.

A caregiver could be a spouse, a sibling, a parent, or someone else entirely.  What makes a caregiver special is their innate ability to see PTSD symptoms as symptoms instead of writing the behaviors off as bad character.  But, of course, the symptoms of PTSD can take a huge toll on the veteran and the caregiver.  So when a caregiver reaches out for help, or to vent - DO NOT say these things.

What a caregiver thinks when they hear this is simply, 'You're a jerk.'

Maybe the caregiver called to complain about how tired she was because she's done all the housework, the bills, worked 40 hours, and parented by herself; however, that does not mean that her husband's highly depressive episode means he's lazy.  It means he's found that staying in bed alone with his thoughts has kept him safe for the last few days.  It means he's so confused and his body is so tired from the rush of flashbacks that if he gets out of bed, he might collapse into a screaming fit of physical and emotional pain.

Other statements that fall into this category would be things like:

Try instead, "I'm so sorry you're going through this season in your life.  He sounds like he's having a really hard time.  You may not feel like it, but you're doing an amazing job.  Only a warrior could pull off working and care giving the way you do.  Can I watch the kids tomorrow for a couple of hours so you can have some time to yourself?"

There are three parts to this response that make it work.

1) Empathy for the caregiver AND the veteran.
2) A compliment - the more specific the better (Example: I love that you still read the kids bedtime stories every night even though you're so exhausted.)
3) A specific practical offer to help.

This kind of response helps redirect the caregiver from her panic to a more mindful and grounded sense of existence.  It might even give her a little something to look forward to the next day.

Here's the thing about this one:  It doesn't really matter what you believe.  What matters is the experience in the home that the caregiver is having in that very moment.

If you expect to get updates on the veteran's condition (like if he has to go inpatient because he's suicidal) I would highly suggest you keep this one to yourself.  Otherwise, a caregiver is not going to give you that phone call because it will take extra energy she doesn't have.  She might text.  Out of respect.  But that's it.  She'd rather deal with it alone than try to convince someone that things are as bad as they are.

Try to remember that the truth always comes out.  Act in love for the veteran's basic physical health.  Your opinion on what is best for him is not helpful.  Especially emotionally.

Instead ask the caregiver what his doctor's have said.  Know your resources and offer them to her.  Offer to take him to a hospital if he's suicidal.

When a caregiver hears this they think, "But he'll die," and the truth is... he might.

These are all parts of the PTSD diagnosis.  Some people have it worse than others.  Just because you know someone with PTSD doesn't mean that they'll share the same symptoms and behaviors as the next person with PTSD.  The VA carries a percentage rating for a reason.  Severe cases of PTSD look very different than a milder case.  Severe cases mean - they cannot function without a caregiver.

Instead remind the caregiver what she can control.  Specifically ask her if she's showered and eaten today.  Has she seen her doctor or therapist?  As she was giving her veteran his medication, did she take her own?  Caregiver's forget to eat as they're feeding their veteran.  Remind them specifically how to care for themselves so they have the strength to continue caring for the person they love.

Try to remember that a caregiver doesn't want you to fix anything.  She just wants you to listen.

Hope Place Counseling Services, PLLC
More of what works and less of what doesn't.